I got married and released my first card game. Still can’t believe that we got all our kickstarter rewards shipped out the same week as the wedding, especially since we did all the planing and design for both. I even made a new puzzle box for the ceremony. Okay, I realize that puzzle boxes aren’t standard, but hey it’s a hobby, and it fit with the venue… and it’s full of booze. But anyways, it was a perfect day in a castle. From there, we took a quick trip to D.C. to check out the Smithsonian. It was fun, we saw an armored rat at the Museum of Natural History.

Note: if you happen to be intending on getting married in Massachusetts, I strongly recommend Hammonds Castle.

As for the card game, my wife and I took No Regerts to a couple conventions and sold enough to refill our coffers after all the wedding debt. Shockingly, I ran into someone that actually got an illustration from the game tattooed on the back of his thigh. I would have preferred that he not drop his pants in the middle of a board game cafe to show me, but hey, at least he was enthusiastic about it.

Now that No Regerts is out and selling, we’ve gotten started on a couple new projects. My wife has a new game in the works and I have something special moving forward with a round of testing. But even bigger, is the fact that I’m actually doing something new. Writing.

What started as an exercise in board game lore, ended up being a full novel, and I can’t believe how much I enjoyed writing it. Though honestly, I have my wife to thank for supporting me and convincing me to pursue it. I just hope it doesn’t turn out terrible. With that in mind, I set up this blog to cover the book and I’ll do my best to keep every one in the loop. So, buckle in and come along with me. And always, Party Hard. 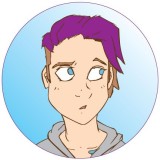 The grocery store now versus going when I was 18 When I was 18 and started to shop for my own food The possibilities were ...

I had a thought the other night

When you tell @js_writes you need a birthday frog pun.

Me, a sophisticated author: I just released a book that contains a deconstruction of the overused damsel in distress trope to show how female characters should have agency and their own motivations.

Also me: This is my undead necromancer MC, his name is Digby Graves.

Ready to Dig some Graves?